Markov chains are a way of stochastically modelling a series of events where the outcome probability of an event depends only only on the event that preceded it. This post gives an overview of some of the theory of Markov chains and gives a simple example implementation using python.

A classic example of using Markov Chains is in modelling the weather. We know intuitively that if today is rainy then there is a good chance tomorrow will be rainy too. We might also expect it to be fairly likely to be cloudy, with only a small chance of being sunny. We can make similar judgements about what tomorrow’s weather will be like if it is cloudy or sunny today.

We can write that slightly more formally in a table, also known as a transition of stochastic matrix:

We can ‘chain’ together a series of such predictions, which is what Markov Chains are.

An alternative to the table-view is to think of the states and transitions as a graph: 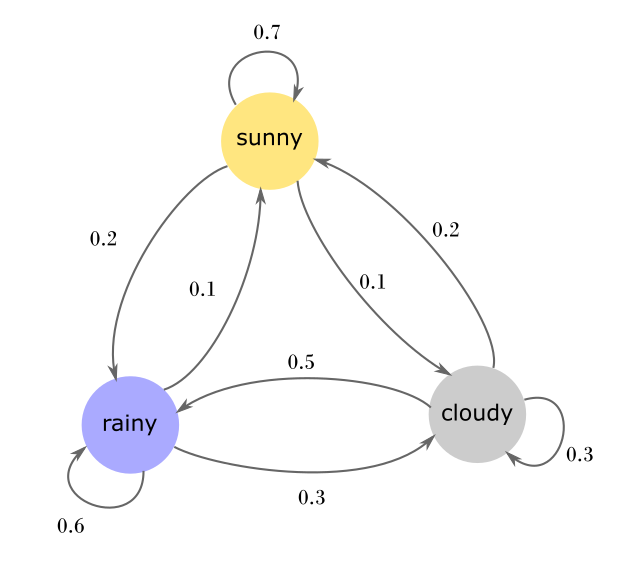 Here’s a five-day run using a 10-sided dice simulator to decide the next day’s weather:

This works fine, but it seems rather arduous to have to work out each day’s prediction manually.

Instead of working through Markov chains manually we can use something like a python script. In this case it set up to predict the next 14 days, given that the today is sunny.

For a single run, this code predicts the weather for the next five days as being: