The Nobel Prize in Physics for 2014 was announced earlier this week, “for the invention of efficient blue light-emitting diodes which has enabled bright and energy-saving white light sources”.

To some this is a more technically-leaning recipient than they might have liked to see, citing examples,such as the discovery of topological insulators, as being more of a great leap forward for science, rather than a development of technology, a solving of a problem.

We can’t know what went on behind the closed doors of the selection committees, but to help shed light on the interpretation I did a quick look into the previous physics awards.

The greatest Benefit on Mankind

Firstly, it is important to remember that Alfred Nobel specified that he wanted the award to go to that which offered the ‘greatest benefit on mankind’. Not the coolest new technology, or the snazziest new science. What matters is helping humanity.

Although direct, this statement does rather leave things open to interpretation. Indeed, how big an effect ‘pure’ science has on society and humanity is a continuing rumbling issue, particularly in the current funding climate. Technology may help us now, but science can lead to cultural, societal and technological advancement and improvement in the future.

Perhaps in the long run ‘pure’ science has the greatest potential for benefitting mankind, but surely it’s also good to encourage and reward such pragmatic and immediate contributions?

There are some previous Nobel Prizes in physics which immediately come to mind, such as Albert Einstein and the photo-electric effect, the Higgs Boson, or the work of the Curies. But what about the less well known awardees?

I went through the list of all awards in physics and divided up the awards into ‘technology’ and ‘science’. The division is crude and only based on my quick interpretation of what constitutes ‘science’ and what ‘technology’. For example development of the electron microscope might count as technology, whereas the mapping of the cosmic microwave background falls on the science side. 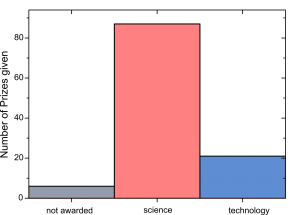 The number of ‘science’-based awards clearly dominates over that of ‘technology’-based’ awards. A few years no prize was awarded.

‘Science’ has a clear lead over technology, but there has still been a good number of more technologically-leaning physics Nobel prizes awarded over the years. If anything the number could do with being bumped up a bit.

The next chapter in the stort of light

I don’t know whether the selection committee considered this, but looking back over the previous physics nobel prizes two stood out as being particularly relevant to this year’s. Firstly 1956, for the work towards transistors and 1912, for work towards developing improved lights for lighthouses and buoys.

It seems somehow fitting to me that this year should be somehow a combination of
those two previous awards: a new means of producing light, based on semiconductors, which
has been a great benefit to mankind.