Power laws: we’ve seen them before

Power laws describe many physical phenomena, but we’ll see here that a power law can help you to work more efficiently and more effectively.

Examples of power law functions in science include black body radiation (described by the the Stefan-Boltzmann law), the movements of planets (described by the Newton and Kepler laws of motion) and the ‘square-cube’ law which describes how the surface area and volume of a body changes with changing its length.

Power laws describe situations in which changing one quantity causes another to change proportional to the first raised to a power. Unlike a linear relationship, it means that all contributions are not equal. The square-cube law for example says that if the length of an object changes by a proportion, then the surface area will change as the square of that proportion, and the volume will change as the cube of that proportional change in length. We can see this relationship schematically: 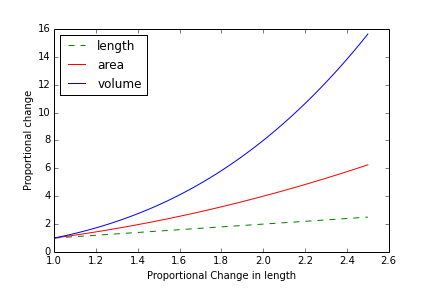 The examples given so far are derived theoretically, but there are also empirical power laws; those arrived at by observation rather than theory. Examples include the sizes of earthquakes, moon craters and solar flares, and the frequencies that words occur in different languages.

Wait, what? Power laws are actually useful, too?

What surprises me is that one such empirically derived power law can be used to described our working lives. A principle known as the 80-20 rule broadly says that 20% of inputs produce 80% of outputs. This idea, really more of a rule of thumb than a strict law, has been embraced by businesses and management since it can be usefully applied to many different work place scenarios. Why this is important and how it comes from a power law will become clear below.

The 80/20 rule (also known as ‘the law of the vital few’) is in fact a specific case of a power law: the “Pareto” distribution. Vilfredo Pareto, an Italian economist, derived the law after noticing that rather than being evenly distrubuted, most peas were being produced by a small number of pods. Again, we can think of this graphically: 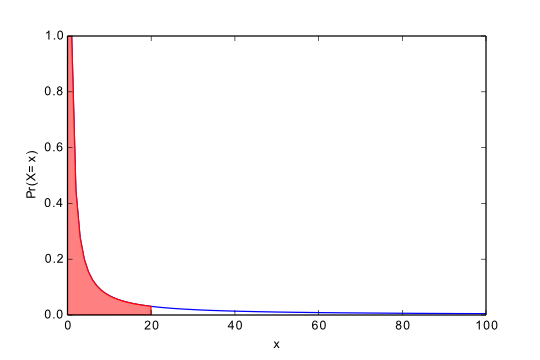 Since these initial observations the ’80-20 rule’ has been found to apply in such circumstances as:

This idea has also been found to apply outside of strict profit/loss business. For example Microsoft found that 80% of bugs came from 20% of errors; in US health care 20% of patients take up 80% of care resources; and in health and safety 20% of hazards cause 80% of accidents.

So it works for big business, but there is no reason why we can’t apply a similar principle to our own time and our own work.

If we compare to the Pareto Distribution graph above, our x axis might be work done per hour, and the y axis the fraction of hours in a week which actually get that amount of work done.

Of course where your “20%” comes might be at the start of your project, the end, or somewhere in the middle. The important point is that each unit of time is not created equally.

The reason this realisation is so powerful is that if we know that 80% of our outcomes (positive or negative) comes from 20% of our activity, and then we can focus on that 20% to maintain the success or make large improvements. We don’t need to worry about the other 80% as that has a relatively small effect on outcomes.

In the examples above Microsoft knows that if it finds and prioritises the 20% of major code errors it can dramatically improve the number of bugs in its programs. In health and safety, if it is known which the main accident-causing hazards are, these can be targeted and removed.

Using the 80-20 rule can make your work much more efficient and effective.

Yea, but what about academia?

So the 80-20 rule seems to have been taken up by businesses, but how can it help us in academia? Let’s take a look.

One of the more controversial topics in academia right now is the subject of impact factors, and whether or not they are a suitable and accurate measure of the importance of a journal. One of the key criticisms of impact factor is that generally speaking 15% of articles in a journal will produce 50% of all citations for that journal. Not all journal articles are created equal: some of them are more equal than others.

Less controversially, I’m sure we’ve all had days (or weeks!) where things just don’t seem to go well most of the time, but that a few things do seem to work out. I also know from personal experience that only around 1 in 5 of my experiments seem to work out, and that if you write 5 papers you might expect one to get the lion’s share of citations, with the others not doing so well.

So it does seem that elements of academia also fit the 80-20 rule.

Ok, so I know that calling it a ‘rule’ is perhaps over doing it a bit. And maybe it’s stating the obvious to say that we can’t expect things to work in our favour all of the time. But given that the physical world and the world of work do seem to follow this power law behaviour, how can we use it to our advantage?

First, we can be forewarned that things will not always work in our favour: we should expect that indeed most of the time things will not work out. Secondly, and maybe more importantly we should try to recognise what our “20%” is and make sure we capitalise on it.

We can also make ‘compound’ 80/20 rules. For example we know that 80% of our success and progress will come from around 20% of our effort. We want to make sure that we spend as much time as possible working on ‘20%’ projects, rather than getting bogged down in the 80% which probably won’t result in much anyway. [Incidentally, it is for this reason that large corporations such as HP have a reputation for a relentless hunt for fresh ideas and a ruthless culling of those that don’t work.]

So hopefully, if we can identify our 20% areas: the projects that we should prioritise, the problems which we should solve sooner rather than later and try to stay away from the 80% of projects and issues that just don’t matter, then maybe those of us working in academia can help put this power law rule of thumb to work in our favour.

Banner image from Isabel Eyre under CC BY 2.0