Data from micromagnetic simulation software has become a common sight in research papers – either as standalone work as support to experimental data.

There are now quite a few choices for which micromagnetic simulation software to use. This list gives an overview of the micromagnetic solver packages I’m aware of. They’ve all got their own features, quirks and development status.

Hopefully this will give you a taste of what’s available and help you pick which package is best for you.

Finite difference calculations are done by dividing the simulation up into a square or rectangular 3d mesh.

The finite difference approach tends to be suited to rectangular shapes and thin films. One of the main disadvantages is the ‘stair-case’ artefacts that come about on rounded objects as the simulation is limited by the mesh resolution.

There is a good comparison of the finite element vs finite different calculations here.

With a full name that just rolls of the tongue, the Object Oriented Micromagnetic Framework (or OOMMF is it is more commonly and mercifully named) is a very popular micromagnetic solver software.

OOMMF has been developed since around 1998 by NIST, principally by Mike Donahue, and Don Porter, with the original aim of creating an extensible, public domain program for micromagnetic simulation.

Of the micromagnetic solvers in this list, this is the one I am most familiar with. If you’re interested in giving OOMMF a go you can check out my OOMMF quick start tutorial here.

There are currently not many publications using mumax, but I’m sure that won’t be the case for long as more researchers become familiar with it and more comfortable with using GPU processing.

The code is all available on github (my new favourite version control site – if there can be such a thing), which is a big plus as far as I’m concerned.

I’m not at all familiar with this package. From its website it looks like it has some nice features.

Finite element calculations use a calculation mesh based on tetrahedra.

The main advantage of using a finite element approach is that it is better than finite differenceat simulating curved or rounded geometries. The main disadvantages are the need to produce a mesh for each geometry studied and being relatively inefficient at calculating thin films and rectangular geometries.

One of nmag’s main selling points is its connection with python. Micromagnetic problems are defined in this friendly language and data processing and manipulation can easily be done with python modules.

Latest release: January 2012 Developed has officially stopped for now and is provided ‘as is’

Another micromagnetic solver hosted on github, this solver offers GPU and CPU processing.

Like nmag above MagNum uses python so should be relatively easy to use, extend and do post-processing with.

This is another solver that I’ve heard about, but never used myself. Development seems to have stopped some years ago. 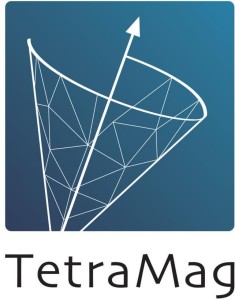 Developed at the Juelich Research Institute in Germany, TetraMag is another micromagnetic software package that makes use of the significant processing power available in GPUs.

I couldn’t find a download link – if you know one – please let me know!

Built with a mathematicians perspective from the ground up to address some of the limitations of OOMMF, this package is developed in-house at spintec.

I couldn’t find a link for downloading this software, but you can check out this abstract for some more details.

I couldn’t find any download details for this – please let me know if you know of one.

Which ones have you used? Which is your favourite? Have I missed any out? Let me know in the comments below.