Confidence intervals are the range often provided alongside other statistics. As their name suggests, they somehow convey a degree of uncertainty in the statistic quoted, but what actually are confidence intervals? And how can we get an intuitive understanding of them?

This post goes into some of the theory behind confidence intervals and points you to a great interactive tool for understanding them.

Confidence intervals are about transferring measurement of sample statistic, such as median or mean, to an inference about the statistic for the whole population.

As a somewhat extreme example, you would probably not have much confidence that a single sample of the height of one person closely resembled the actual average height of a whole country. Confidence intervals are a way of formalising that intuition.

It makes conceptual sense that a confidence interval is somehow related to how ‘sure’ we are about a number. But there are many incorrect ways to interpret that idea of being ‘sure’.

The underlying population does not change as we sample it, but the sample itself does ‘dance around’ the population statistic. I think this is what can make the concept of the confident interval difficult to grasp – it is not inherent to a single sample, rather it sets what the expected outcome would be if many samples were taken.

An Interactive Tool Can Help

I’ve tried to avoid discussing the maths behind confidence intervals, but so far I’ve still been rather wordy. A good way to intuitively understand the correct interpretation of confidence intervals is the interactive tool on this page from the Khan Academy. 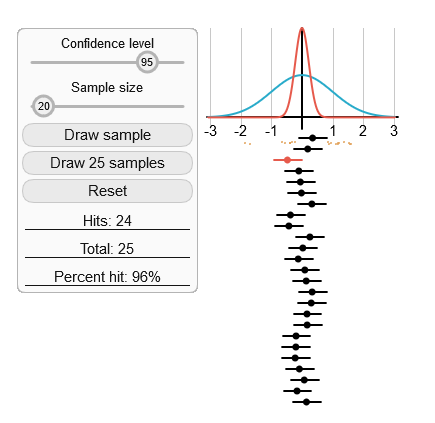 Read more about the correct interpretation of confidence intervals.