In this post I show you how to simulate an OOMMF hysteresis loop. You can follow this tutorial with more or less any OOMMF oxsi mif file, but I will be using a version of the oxsi exchspring.mif example file that comes with OOMMF, modified to automatically display some outputs.

The simplest way to include a Zeeman energy term in an OOMMF mif file is with an Oxs_UZeeman term which includes a uniform, homogeneous magnetic field to the simulation.

Read the official documentation about Zeeman terms in OOMMF.

In the exchspring.mif example, the Zeeman term is:

Which uses the a multiplying pre-factor to put ‘Hrange’ in units of mT. Each line in the Hrange represents a ramping of the simulated magnetic field.

Find out more about using ‘subst’ for variable substitution in OOMMF.

So in this example the field is ramped from 0mT to a field with predominantly positive x component, with some y component in 10 steps. This field is then ramped to an equivalent negative field in 20 steps, before being ramped positive again in a further 20 steps.

If we run the exchspring.mif example that comes with oxsi (making sure to capture the output to mmGraph) we can seee that the applied magnetic field changes as the simulation progresses: 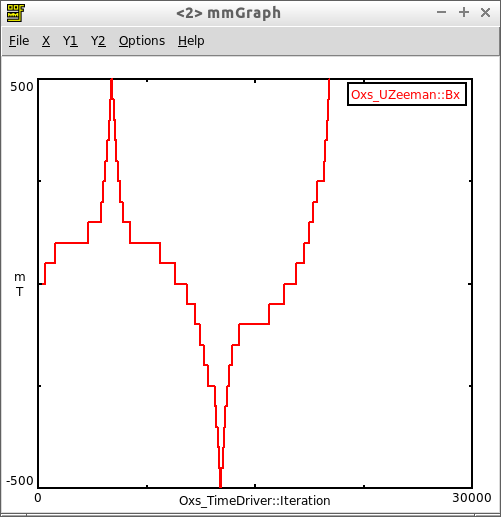 To get the characteristic M-H hystersis loop we just need to plot the magnetisation against the applied magnetic field: 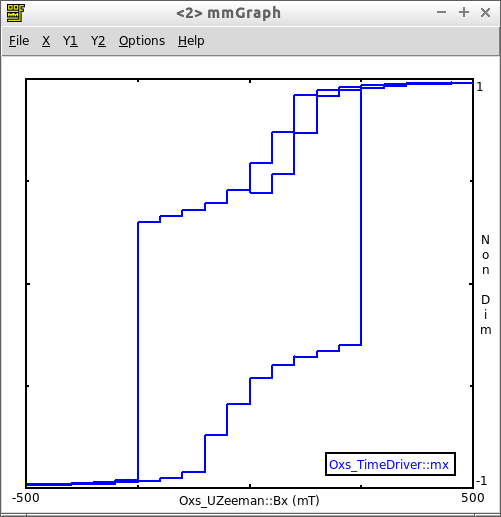