One of the more granular sources provided by the Hadley Centre is daily rainfall totals for each region. You can download the individual files from the website, but unfortunately it looks like their robots.txt prevents programmatic downloading of the files.

Once downloaded you can use pandas read_csv to load the data into a pandas dataframe.  A couple of things to watch out for though:

The full line I used was:

Since the file did not come with its own header columns I added them after loading the file. I also added a column for region so that multiple regions could be handled at once if necessary (‘SEEP’ is from the original data file and means ‘South East England Precipitation’).

The data table provided is in a ‘wide’ format with a column for each day of the month. This is helpful for human-readability, but isn’t so good for computer processing. To convert for a ‘wide’ to a ‘long’ form table we can use the ‘melt’ pandas method.

The melted dataframe is in a good place to do further analysis and get a feel for what is possible.

How Much Rain Will There Be? 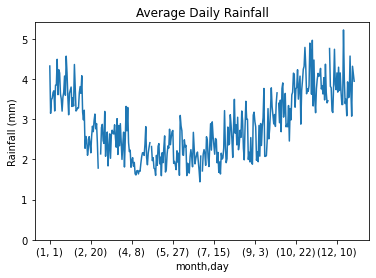 Having the mean rainfall is one thing, but often we want to dig a bit deeper than that. We can easily extend our initial ‘mean’ calculation to include maximum, minimum and standard deviation of rainfall measurements.

How Likely Is it to Rain?

We can also use this historic UK rainfall data to give some estimate as to the chance of rain on a given day. I want to stress again that this isn’t really forecasting, or at least I wouldn’t rely on it for anything important!

Since I have put an additional region column, we also need to filter on that. Read about filtering with pandas.

The basic idea is that you count up all days in the past which had rain above a certain limit and divide by the total number of days. From one forum (here and here) it looks like about 1-2mm rain across a day would likely not get in anybody’s way, so I have used that as the threshold rather than simply 0mm which is probably a bit too strict. 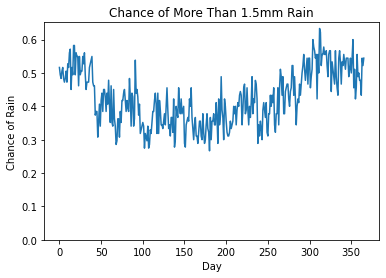 Other Sources of UK Rainfall Data

You may also be interested in other UK Rainfall data such as the CEDA archive and the Met Office.