Flask is a lightweight python web framework which can used for creating RESTful APIs. This post shows you how to make a simple Docker Flask SQLite API. This post builds on the excellent Flask API Lesson on The Programming Historian.

If you just want to dive straight into a Docker Flask SQLite API example you can clone this git repository.

As I have already noted, I am essentially using the flask api developed in the programming historian guide. The difference here is that things are encapsulated in a docker container.

What we want to happen is: 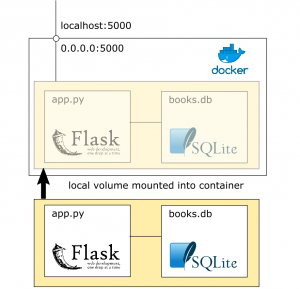 Docker is going to take the place of our usual physical system, so we will start there. I’m using a base docker image based on alpine – a lightweight docker image.

We then just need to do some other set up work:

Since we want the docker container to interact with the filesystem, we will need to mount the right directory to do docker when we spin up the container. We could run this dockerfile directly, but instead we will use docker compose.

Docker compose is primarily a way for controlling multi-container builds, but we can use it here to encapsulate some of our configuration.

For this case the docker-compose.yaml file controls: how the container is built, the port mapping, and which volumes to mount.

Docker should now be configured to pick up the contents of the development directory and try to run ‘app.py’ in that directory using python. app.py will be our flask app which we now need to create.

The docker file also expects to find a file ‘requirements.txt‘ which will define which packages need to be installed to the docker container with pip.

For the purposes of this example I am using the sample database used in the programming historian guide. The flask application will read from this. I put it in a directory ‘data’, but it is largely up to you where you put it.

The data directory is in the same directory as the docker file, so will be included in the mounted volume specified by the docker-compose.yaml file.

With these things in place we can write our flask code in app.py. As noted elsewhere my example here is based on the programming historian example. My code is available here.

I won’t go too much into the detail of the flask app – you can download it here – but will point out a couple of things to watch out for when developing:

If all is successful the api should be accessible on localhost:5000.

There are more examples on the programming historian site, but a couple you can try to test out your api are: