Joining tables in SQL is an essential part of many digital services and products. Joins let you answer questions such as which customers bought which products? How many staff work at a particular location? Which students are in which classes at a school? Joining in SQL becomes even more important when your data are stored in a normal form.

Different types of join are possible in SQL, and each has different uses and strengths. There are already some excellent resources available online that talk through different aspects of SQL joins such as Youtube, or Stack Overflow.  This post is a quick general overview of the keys points about SQL joins.

What is a join?

Joining in SQL is all about linking database tables in a meaningful way. But before we think about databases, let’s think about what we might do in the “real world”.

As an example let’s think about a teacher who keeps some lists about clubs at his school. He has a list of the club names, and details about the club activities. He would like to know which pupils  are involved in each  club. He speaks to the pupils to ask them each which clubs they are involved in. He now has two lists, or tables:

one with information about clubs,

and one with information about pupils:

Since our teacher wants to know about a combination of pupils and clubs, he will need to somehow join his two lists. To do his ”join” he can print out a copy of the two lists. He can go down each row in his list of clubs, and then looks through his list of pupils to see which pupils are involved, and make a note in a new table.

It Depends What We Want to Know

At this stage the teacher has a choice he can make about the information he cares about.  For example, does he want to know:

Right away some of these seem more useful than others, but they do each correspond to a type of ‘join’ he could do. Which join he selects will depend on exactly what he is interested in.

Maybe he is concerned that some pupils are not involved in any clubs and might be missing out – in which case he would want to include all pupils.

It might be that the school has a policy of giving cupboard space to all clubs, but if there aren’t any pupils in the club, this space could be freed up – in which case he would want to include all clubs, but would not be so concerned about pupils not in clubs.

It’s also possible that he would like to know about active clubs and their associated pupils, in which case he would only want a list which ignored empty clubs or inactive pupils.

These scenarios faced by our example teacher are just like the SQL joins available too us. Let’s looks again at this teacher example using SQL language.

You can have a play around with the SQL used in these examples here.

Cross Join – All Combinations of pupils and clubs

In SQL we would have:

which gives the cross join output: 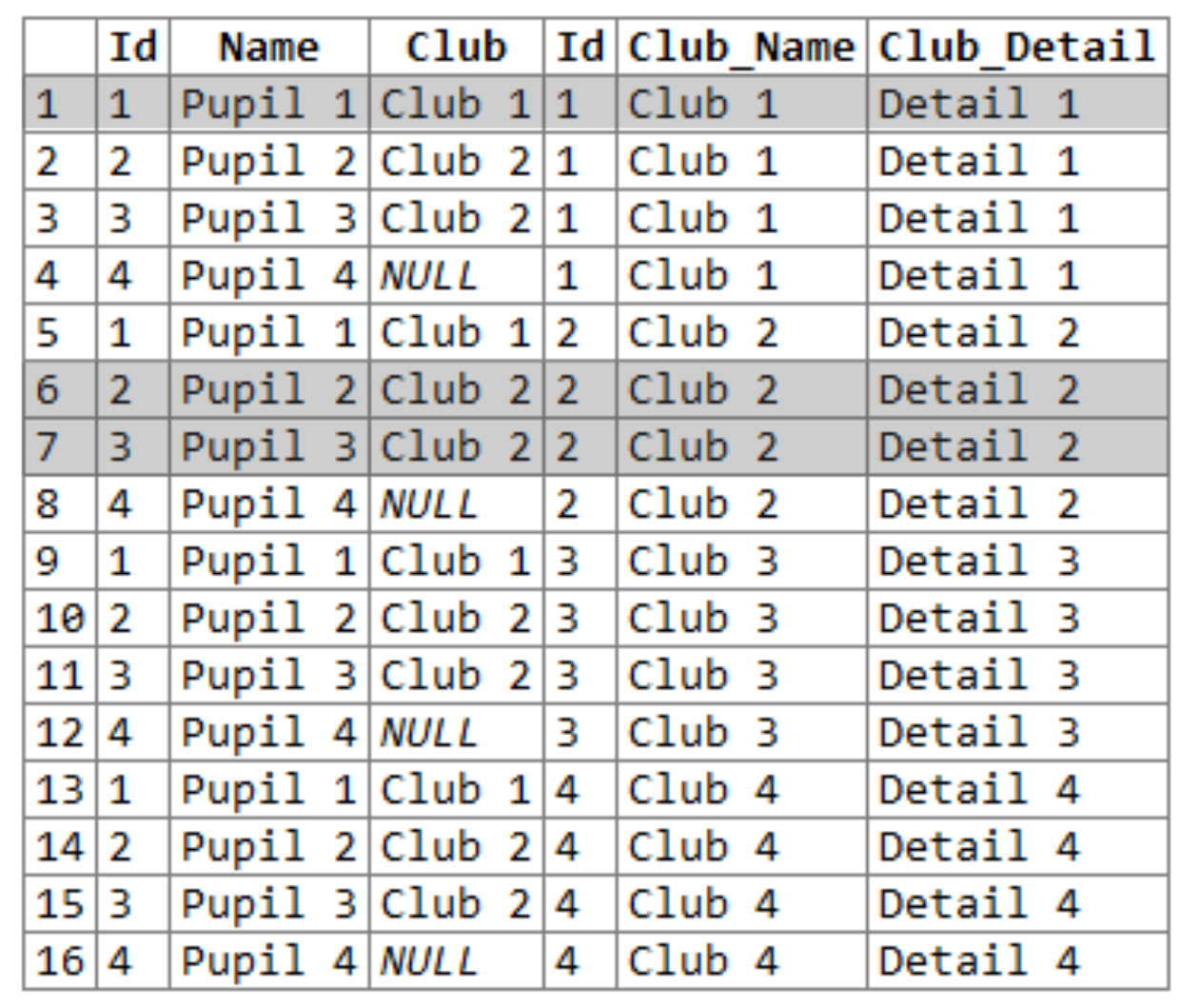 I have highlighted here the rows that correspond to the inner join, below.

The inner join is often the ‘default‘ type of join that people think of – it returns rows where there is a match on the fields you are joining on. This is what the teacher would use to get a list of the active clubs and associated pupils – he could join on the ‘club name’ field.

In SQL we can write

An inner join won’t give you any information about the items in each list which didn’t match. The rows that didn’t have a match are missed out.

In terms of the cross join mentioned above, we can imagine the cross join (all combinations of rows from both tables), and keep only the rows where there is a match on the fields we are joining on.

Outer joins preserve the non matching rows from both the left and the right tables. The inner join discards any rows which don’t match. Outer joins let us keep these, even if a match between the two ta Les isn’t found. I talk below about left and right outer joins – really left and right just depend on how we think of our tables.

These are also sometimes just called left joins. One of the options our example teacher might care about is to see which pupils have not been getting involved in club activities. To include these rows we need to use a left outer join. ( Whether we use left or right outer join just depends on which table we consider to be “left” and which one “right”).

In SQL we would write:

Sometimes​ just called right joins, these joins are conceptually the same as left joins. The only difference comes in how we think of the two tables we are joining. The right join allows us to capture the null rows of our right hand table – in this case the clubs without any pupils as members.

Full Outer join – we want to see both pupils and clubs whether the are connected or not. 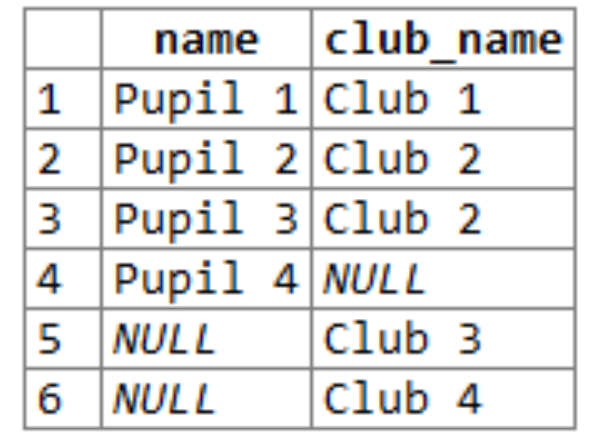