I do occasional audio recording of voice and instruments, but not so much that I wanted to spend a ton of money. Here’s the setup I use.

You get what you pay for

With audio equipment, there will almost always be something bigger, better and more expensive that you can spend your money on.

With this in mind you need to set a limit on what you’re willing to spend, and then settle for the audio quality that you will get for that money.

My arrangement meets my modest needs for not too much money (less than about £150).

Our first item is an external sound card. Of course you could use your computer’s internal one, but the chances are it’s not all that great. By getting a dedicated analogue to digital converter, you can greatly improve your recording quality.

I use a Behringer UFO202 which simply plugs into your computer by USB. The built in pre-amp works, but isn’t all that powerful, but for under £30 you can’t go too far wrong.

If you’ve got your own pre-amp already, you might want to save a few pounds and go for the Behringer UCA202, which is essentially the same soundcard, but without the pre-amp. 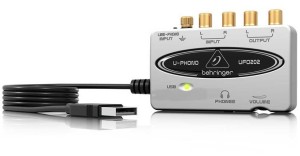 The Behringer UFO202 is a cheap way to get reasonable digital recording quality.

Your laptop probably already comes with a built in microphone, but for doing anything other than chat to your mum on Skype, it’s worth getting dedicated one. The recording quality will be better, and you’ll cut down on fan noise from your computer.

I splurged on a reasonably good microphone – the Shure SM57, the. It’s more aimed at instrument recording, but there’s also a very similar model – the SM58 – aimed more at voice recording. 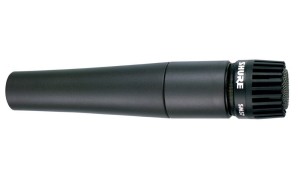 My Shure SM57 microphone is one of the pricier bits of kit in this recording set up.

With either of these microphones you’ll need a pre-amp of some sort to amplify the output signal before it can be recorded. I’m just using the built in one on my Behringer UFO202 external sound card, but for quality recording you might want to get a dedicated one.

If you go for the microphone and sound card suggested here you’ll need an XLR to 6mm  jack cable and a 6mm female jack to RCA male adapter.

Strictly speaking you could just use any old headphones, but since you’ve gone to the trouble of making a good recording, it makes sense to get some reasonable headphones too.

I went for these Sony MDR 7506 headphones.

The final piece of the puzzle is some cheap (free) recording software. For this you don’t need to go much further than Audacity, which does all you’re likely to need including multitrack recording, noise reduction and track editing. 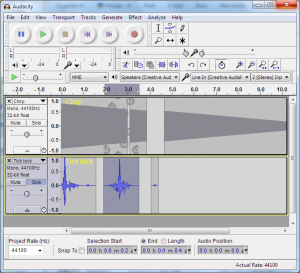 If you’re really serious about audio recording on a budget you should check out KXStudio, a linux distribution dedicated to sound recording, editing and processing.

This entire linux distribution was built from the ground up to offer high-quality, low-latency audio recording. It also comes with more advanced music production software as well as drum machines, and midi instruments.