Inspired by the Enterprise Integration pattern of ‘pipes and filters‘ I wanted to make a simple python pipes and filters example. With some digging I found this GitHub repository, which does an excellent job breaking down the message-based approach to Object Oriented Programming described in a series of blog posts: 1, 2, 3.

To explore the idea of ‘pipes and filters’ I wanted to work through an even more simple python pipes and filters implementation. The implementation described here is probably over-simplified and doubtless has issues and limitations. I hope though it can be a useful tool for understanding, and perhaps even usable in some simple projects.

In overview, we’ll set up a ‘Pipeline’ class which holds a list of filters, and a method for executing the pipeline against a message provided. 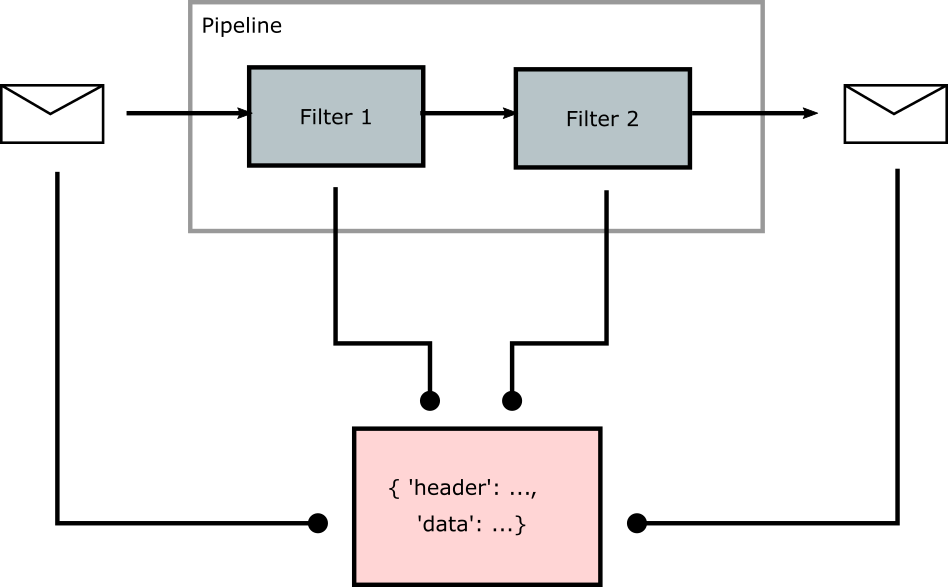 Executing the pipeline applies each of the filters to the message.

Which prints the following output:

The message itself is represented by a dictionary. Dictionaries are mutable and each of the filters is actually modifying the original message dictionary. In a sense this violates one of the common principles of working with messages: that they should be immutable.

We could think of the messages in this case as ‘document messages‘, which are permitted to be mutable. It also conceptually seems a bit odd that the message is not passed through the pipeline, so much as stays in the same place while a series of filters act on it.

In an attempt to reduce the number of concepts needed to understand this example, I have decided to stick with dictionaries as the message, and not attempt to address this in the filter/pipeline. See the section ‘taking things further’ for more discussion about some possible ways of handling immutability as well as some other topics.

In this example filters are defined by functions. Each function takes a message as an argument and mutates the data in the message. Since the messages are mutable dictionaries there is no need to return the message itself in this implementation.

For more sophisticated filters, you may want to define the filters as classes rather than functions. See the ‘Taking Things Further’ for more about this.

The pipeline itself is defined as an object with methods:

As mentioned elsewhere in this post, the use of a dictionary as the input message means that the effect of running the pipeline is to modify the message in place. The modified message can be read or used further once the pipeline has run.

This simple python pipes and filters example has deliberately taken a bare-bones approach, and there are several areas that could be refined or extended. Below are some examples: